The Legend of the Mystical Ninja

Ganbare Goemon Yuki-Hime Kyûshutsu Emaki! (The Legend of the Mystical Ninja’s Japanese title) belongs to the first batch of Super Famicom games. To be specific, it was the 24th Japanese release on Nintendo 16-bit console, and it gained an excellent reputation among original Super Famicom fans.

The 2 player mode is guaranteed to make you laugh

Ganbare Goemon Yuki-Hime Kyûshutsu Emaki! (The Legend of the Mystical Ninja’s Japanese title) belongs to the first batch of Super Famicom games. To be specific, it was the 24th Japanese release on Nintendo 16-bit console, and it gained an excellent reputation among original Super Famicom fans.

Konami perked up after Gradius III

After the lukewarm reception of Gradius III (mostly because of the massive slowdown), Konami developers had to dust themselves off and show the industry that they could create hits for the Super Famicom too. For their second title on this system, they decided to make a new episode of the Ganbare Goemon series, which consisted of one arcade game and three Famicom episodes (the first one being also available on MSX2) at the time. Gradius III was disappointing, but this was not the case of Mystical Ninja, which is a wonderful cart packed with novel ideas. The oriental feel and the wacky Japanese humor felt very unique in 1992, and were especially refreshing for the Western market when it came out. To me it was completely different from any other game. Besides, we Westerners never experienced a translated episode from the Ganbare Goemon series before that one. That’s right, Yuki-Hime Kyûshutsu Emaki was released in its rectangular manatee colored US version in 1992, and then even in some European countries in 1994 (in the UK, in Germany… But not in France!). 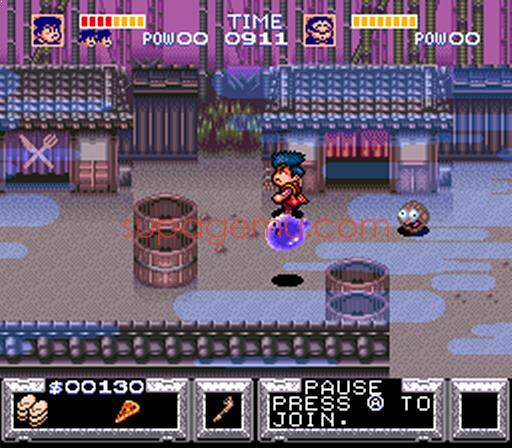 A beautiful masterpiece full of fun and surprises

Truly, Konami created a peculiar universe in which statuettes of cats make your weapon grow and where touching women makes money! The stunning visuals depict a very Japanese world mixing tradition and chronological inconsistencies. The shading sky in the background, the Japanese wooden house, and the bamboo poles looked magnificent! The visuals really make excellent use of the SNES color palette (even though the second SNES episode does even better in that department). Furthermore, as a lot of early Super Famicom games, Ganbare Goemon takes advantage of the mode 7 to show off: scaling effects are used during the intro, and we can see the background rotating several times in stage 4 for instance. The most impressive effect is probably the scaling used on the fourth boss, which is a giant head that grows until it almost fills out the entire screen!

In addition to the stunning visuals, Mystical Ninja includes many surprising ideas. First, it mixes adventure areas with platformer sections. Each of the 9 stages (called “Warlock zones”) starts out in a town area in which you can prepare: try to buy as much equipment and food as possible, and talk to the villagers to gather information. Pizzas will replenish your life bar when you run out of life points, while armors and helmet will protect you (but again, video games do not work like real life: the more you buy, the more the unit price increases!). These town scenes are not devoid of action though: you can hit passersby to get money and other bonuses. But be careful not to hit “bonus babes”: such an uncourteous behavior will cost you $100. Kiss them instead to make 50 bucks! (Interesting concept! The instruction manual actually phrases it like that: “befriend these nice ladies”!) When you are done preparing, you can then move to phase 2: the action scene. Contrary to the town scenes, these platformer sections are played on a single plane. If you play with a friend, cooperation will prove very important: jump has to be performed in sync to avoid losing lives stupidly. Konami came up with a clever solution to make things easier: you can ride on your partner’s back to divide up tasks: one of the player is in charge of moving and jumping while the other hits enemies. Very smart!

Secondly, Goemon (Kid Ying in the US version) and Ebisumaru (Dr Yang in the US version) can enter every house in the town scenes! It may look like nothing now, but action games providing that possibility were not so common back then. And what would be found out inside the dwellings and shops was even more astonishing: namely games within the main game! You can even play the first stage of Gradius! The painting, the mole, the dices, and the quiz games are especially enjoyable and profitable. Indeed, you can make money off of some of the sub games. This idea was a stroke of genius: while “preparing” usually means performing repetitive tasks in most games, it proves incredibly fun with Mystical Ninja. This enjoyment reaches its peak with the third stage, which consists of an amusement park! Furthermore, the sub games are plentiful and varied: the other best ones include the lottery, the hockey, the horse racing, the breakout, and the concentration game. As a side note, the maze already appeared in the first Goemon episode but it was part of the main game.

Kid Ying, have you heard the news?

On the other hand, the plot is a little silly, and the dialogues sound kind of cheesy. "Hey Kid Ying! Have you heard the news? I’ll show her that I’m a brave man!” The developers of Mystical Ninja clearly had a lot fun creating this humorous game that does not take itself seriously, while being absolutely brilliant. The story starts with a beautiful ghost woman (a “yûrei”) hurting people in the temple. Armed with a pipe and a flute, Goemon and Ebisumaru obviously decide to check what is going on there. On their journey, they will meet recurring characters such as the ninja cat Kurobei, the wise old man, Sasuke, and Yae. The abrasive dialogues and string of events burst with 90’s flavor. Back then, we did not lose time with endless scenes, we just went straight to the point! For example, when Yae appears and tells her story, Goemon and Ebisumaru do not say a word and just turn their back and leave! So 90’s!

Unfortunately, the US (and PAL) version did not only come with a funny translation but also with censorship:

There were also some little modifications, such as the onigiri being replaced with pizza. 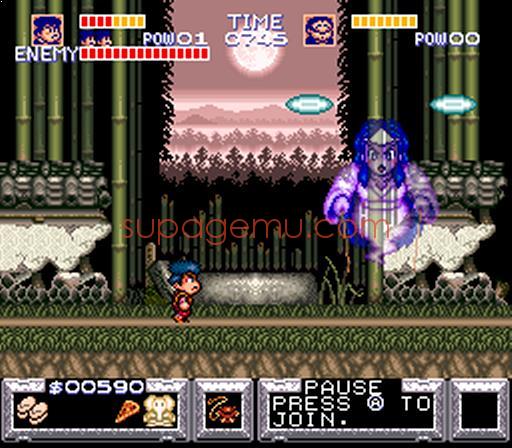 Mystical Ninja was also well known for being quite challenging in its late levels. It becomes indeed kind of tough from the fifth stage, but I don’t find it difficult overall. Loving a game makes it easier! In any case, Mystical Ninja is never unfair or frustrating, and you can always spend more time making money and buying items and extra lives if you have got trouble with an action scene. Everything is not perfect though: the Jutsu powers Goemon and Ebisumaru can learn are very expensive and do not prove very useful. You have to collect a lot of money and scrolls to invoke them, but they do not make much of a difference in my opinion. Another slightly annoying thing is Kid Ying’s Yokohama yo-yo: only the disks from the third form of Goemon’s weapon hurt the enemies, the string part being harmless. But those are only little details that do not have any negative impact on the game as a whole. The long passwords from the logbook shops are more likely to irritate you!

Thanks to its exotic oriental feel, its high quality visuals and soundtrack, and its innovative ideas, Mystical Ninja can be considered a true Super NES classic. It is full of little amusing details that make it lovable: booking the cheapest room at the inn will make you sleep in a slummy place in which you will not recover all your life points, Mrs. Tea stumbles to dump hot tea at you, your opponents grin when you give a wrong answer during the quiz, and there are a lot of secret bonuses and passages… I still play this cart more than 20 years after its purchase and it still makes me smile. I think Ganbare Goemon 2 Kiteretsu Shougun Magginesu may actually be slightly better, yet I prefer Mystical Ninja.

The delicious and very detailed graphics with vibrant colors got only surpassed by those from the subsequent episode. In my opinion, the visual gap between the Famicom episodes and this one is wider than the gap between the Castlevania NES games and Super Castlevania IV.

Like the visuals, Mystical Ninja’s themes mixes ancient Japanese composition (in towns) with modern tracks (the travel agency, the painting game, the logbook shop…). Both styles sound fantastic and create a very unique Japanese, humorous, and mystical atmosphere. Kazuhiko Uehara and Harumi Uekou (who also worked on the Super Famicom version of Turtles in Time) crafted a remarkable soundtrack, which consists of more than 70 excellent tracks.

Jump control was a lot improved in the subsequent episode. In this one, it can prove a little annoying, mostly because it is slow if you didn’t buy sandals at the general store. Aside from that, the crisp controls are nearly perfect.

The preparation phase (i.e. the town scenes) makes Mystical Ninja a lot more compelling than if it were a pure platformer/action game. The action scenes and the bosses get challenging and thus interesting) in the late levels.

The plot and the dialogues are a little silly, but the characters and the peculiar universe created by Konami are fantastic.

The second half provides an interesting challenge, so beating the game will keep you busy a few days. Some town sections are huge and there is lot to explore! I recommend not to rush things and to spend time looking for secrets and playing sub games. The replay value can be quite high if you grow fond of the game: I completed both the US and the Japanese versions many times without ever getting tired of them.

Mystical Ninja never gets boring or repetitive. The 2 player mode is guaranteed to make you laugh and Konami’s masterpiece offers highly varied content by mixing adventure, action, and mini games. Furthermore, it was a truly magnificent game when it came out: the exotic eastern visuals are fabulous and the very Japanese soundtrack sounds awesome. This episode of the Ganbare Goemon series proves rather well balanced and provides just enough challenge. It was also quite innovative and unique at the time of its release. It actually belonged to the first truly awesome Super Famicom games, along with Super Mario World, F-Zero, ActRaiser, Pilotwings, etc.

I perfectly remember first learning about Ganbare Goemon in September 1991 from a French magazine (Consoles+). The game looked so unique and beautiful that I decided to buy it when I get a Super Famicom, along with Super Mario World, Zelda a Link to The Past, and ActRaiser, which were the other games that made me dream. At the time, the Super Famicom was considered a luxury product of amazing quality, and was very expensive and only available through import. In the end, Mystical Ninja was my first imported US game back in 1993. I realized that it was actually Ganbare Goemon by looking at the back of the box in a store. I got pleasantly surprised by so many great ideas (mixing adventure areas with platformer sections, including many awesome mini-games, riding your partner’s back…) that I instantly fell in love with it.