Human belonged to a group of Japanese developers that were thriving on the 8-bit/16-bit systems (Quintet, Compile, Telenet Japan…), but that had more trouble fitting in to the 32-bit market, and that eventually went bankrupt during the 2000s decade. It was a sad turn of events for these once brilliant developers that I loved. Human created some great games such as Jigoku Gokuraku Maru (Kabuki Quantum Fighter), Septentrion (SOS), or Far The Earth no Jakôtei Neo Metal Fantasy (an awesome RPG for the PC Engine). This corporation also tended to specialize in sport games such as the legendary Final Match Tennis (and its sequels), the Fire Pro Wrestling series, the Human Grand Prix series, and obviously the Formation Soccer series.

After Formation Soccer Human Cup '90 for the PC Engine, the series entered into another dimension through Super Formation Soccer on Super Famicom. The overhead view was switched to an impressive semi aerial perspective that cleverly took advantage of the mode 7: getting closer to the goal and the defenders enlarged them. This display was truly spectacular and revolutionary at the time, while not hindering the game’s excellent controls. Some people might disdain the game’s visuals nowadays but they really made quite an impression in 1992.

A theme for each team

While obviously not being as outstanding as the visuals are, the soundtrack nevertheless deserves to be praised. Music is played during the games, and each team comes with its own theme. Most of the tracks are catchy and exciting, and they perfectly capture the spirit of each squad:

All of the teams except the USA have a few outstanding players who are above their teammates in terms of stats. What is interesting is that while the western version only displays the player’s first names, the Japanese one uses slightly disguised real names for some players. For example, Baggio becomes “Ajjo” and Gascoigne becomes “Kaskoi”. Here is the list of the best real players of each team in the Japanese version. They should ring a bell in the minds of 90s soccer fans!

As a side note, the Japanese version is not devoid of “Engrish”: the French team is called “French” instead of “France”, and “Argentina” is named “Argentine”. All those mistakes were fixed in the Western version. 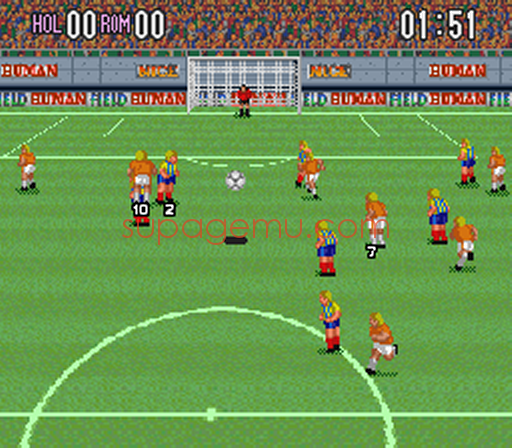 Some other changes were made in the Western version: the stadium billboards that were originally advertisements for Human were replaced with “Game Boy” and “Sim City” panels, and the penalty shoot-out can be directly accessed through the main menu. The most important modification is probably the referee’s behavior: the ref only gives red cards in the Japanese version, while he distributes both yellow and red cards in the US/European version. That change makes the Japanese version more balanced in my opinion: getting a red card is a real punishment that prevents players from using their shoulders too much, while just getting a yellow card is far too lenient. Indeed, there are two ways to steal the ball in Super Formation Soccer: tackling or using shoulder pushes. Tackling is actually the proper way of stealing the ball (you will never get cards for tackling), but it requires better timing than shoulder pushes, which are a lot easier to use. Plus, when you get a red card, the player who underwent the foul will always be injured. As a result, an interesting strategy is to try to injure the best player from the other team. In the end, most players will use only shoulder pushes in the Western version, almost without any consequences.

The other moves are obviously passing and shooting, but there are also more advanced techniques such as curving the balls and performing headers and volleys. The controls are very simple and easy to master, the only downside being the selection of the player you want to pass the ball to: you can press the L, R, or start button to do so, but you will not necessarily get the player you wanted on your first try. That can prove annoying when quickly passing the ball is needed. 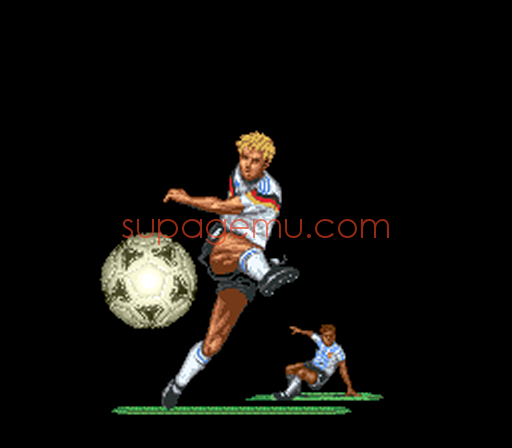 The simplicity of the controls should enable you to easily beat your first opponents (Belgium, Uruguay, Yugoslavia, Columbia…) but the tournament mode will keep you busy for a while until you find ways to easily score every time you face the goalkeeper even against the strongest teams. The tournament can be played solo or together with a friend against the computer. That cooperation mode really is a nice plus. At the end of the World Cup, you will have to face the Human Team (the Nintendo team in the Western version), which has crazy stats and wears a black kit. Beating it will unlock the expert mode, so the main mode can really last for a long while.

But the real meat of the game is of course the versus 2 players’ mode, which plays very differently from the mode against the computer. Dribbling proves to be a lot harder against a human, so you will have to quickly pass the ball in most cases. The biggest change is that some scoring techniques that work every time against the CPU will not work at all with a goalkeeper set to “manual”. The reverse is also true: some shots that have no chance of getting in against the CPU might deceive a human. Playing against another player will force you to come up with new ways of scoring: using curve shots, curve crosses, headers and volleys. Just doing cross shots in the corner of the net will not be enough.

The many moves you can perform and the strategies you can develop (changing the formation of your team and switching your players’ position) make Super Formation Soccer a lot deeper than it seems. In the long run, it is much more interesting to play than most its competitors such as the shallow (but still good) Super Sidekicks for Neo Geo. Matches never get boring: performing back passes is not recommended in most cases, and moving the ball around for too long does not work well. You must always attack and focus on scoring balls. This necessity to always move forward makes Super Formation Soccer exciting and intense, guaranteeing endless hours of fun.

Even though it is not a title that collectors look after and talk about nowadays, Super Formation Soccer is one of Human’s best title ever and is still fondly remembered as a fantastic game by many early Super Famicom owners. I consider it the second best soccer game of the 16-bit era, only surpassed by the much more realistic Jikkyô World Soccer Perfect Eleven (International Superstar Soccer).

Super Formation Soccer looked very impressive at the time, thanks to the innovative semi aerial view that made good use of the mode 7.

Music is played during the games, and each team comes with its own catchy theme, which perfectly captures the spirit of the squad.

The controls are very simple to master, but they nonetheless provide enough depth in the long run.

There is actually a bit of a story after you win the World Cup.

Super Formation Soccer looked very different from the other soccer games of its time.

Beating the game in expert mode will take you a while, and the 2 players’ mode guarantees endless hours of fun.

Stunning visuals, great soundtrack, simplicity, decent depth… Super Formation Soccer has got it all! It is still fondly remembered as a masterpiece by many early Super Famicom owners.

Super Formation is one my favorite soccer games of all time. It even evokes better memories to me than International Superstar Soccer, because it came out at a time when the Super Famicom was recently released, video games import was just starting, and magazines dedicated to console games were in their infancy.