The best ninja game ever

The best ninja game ever is more than 30 years old

When you think of games that are perfect from beginning to end, which games do you think of? Fire Emblem Seisen no Keifu, Metroid, Snatcher, Zelda, Super Mario World, Final Fantasy VI, Tengai Makyô II, or Rockman 2 may come to your mind (well, if you have got good taste), but the original Shinobi arcade game may be one of the very few truly flawless well-aging video games. 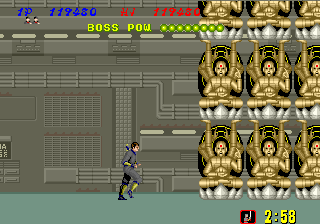 Indeed, good old Joe Musashi never gets old. The gameplay of Shinobi is very simple, yet still very addictive. Inspired by Rolling Thunder, Shinobi enables player to leap up to a higher level, and thus to switch between two planes. It has got incredibly responsive, tight, and accurate controls. Plus, Sega carefully studied the enemies type, number, and location. Meaning, the developers did their best to challenge (and annoy) the players!

Yes, Shinobi is hard and unforgiving. Every single little mistake means restarting the whole level (there are no check points). Memorizing is the key here. You have to both learn the levels by heart and react quickly to enemies’ attacks. The last mission is the most difficult, mostly because you must beat it with one credit. Losing a credit here means restarting the whole game! This sadistic idea, also used in some other arcade games such as Thunder Cross I and II, prevents you to beat the game by inserting many coins. You really have to master the game to finish it! 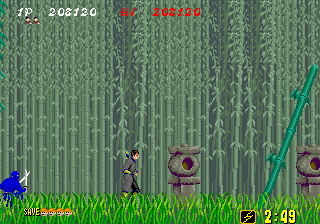 But it turns out that Shinobi’s difficulty is perfectly acceptable, thanks to perfect controls. Joe Musashi’s responsiveness is nothing short of phenomenal and makes the game really fair. Plus, the magic attack and the gun will make your life a lot easier.

All in all, Shinobi is a timeless masterpiece, and probably my favorite Sega game ever. I prefer it to the subsequent episodes such as The Super Shinobi (MegaDrive), mainly because the gameplay was changed (a life bar and no more hostages) from the Shinobi/Shadow Dancer system. Shinobi’s visuals aged gracefully, and the soundtrack is legendary. This is really a must have for every arcade collector!

Nothing too fancy here. Shinobi’s visuals are sober, elegant, and perfectly clear.

The soundtrack creates a very charming oriental atmosphere. Every theme has become a classic and brings back great memories. I especially love “BGM #4”.

Remarkable controls make up for the high difficulty level. Switching plane or ducking is very fast.

The levels are perfectly designed and of ideal length.

Shinobi is an important milestone in the history of video games. It took the concept of Rolling Thunder further into perfection.

Mastering the levels requires time and patience. Spending many hours and credits is necessary to beat the game. Shinobi is also a perfect game for a one credit challenge.

A flawless and timeless masterpiece.

The best ninja game ever.