Panorama Cotton usually gets highly praised for its impressive visuals and remains one of the most sought after Mega Drive cartridge. The game indeed looks wonderful. If you set Cotton’s speed to the maximum, the fasted paced scrolling becomes incredible.

I bought Panorama Cotton along with its magnificent, stylish, and essential tea cup about 15 years ago, while its price was still reasonable (but still high!). I have always been a huge fan of the Cotton universe and its characters. This story of this ever hungry cute sorceress, who only thinks of eating candies (called “willows”) and who does not really care about saving the kingdom, really works for me. I enjoyed the first two games very much (Cotton Fantastic Night Dreams and Märchen Adventure Cotton 100%), so I had big expectations, and I really thought I would love Panorama Cotton, which is considered a gem by many gamers. Does the game live up to its reputation? You will find out the truth by reading the following lines, my dear readers.

The first impression is not always right

Well, the answer is YES! I have to admit that at first, Panorama Cotton made a bad impression on me though. It seemed to suffer from the same issues as Rainbow Cotton: you can’t see what’s in front of you because of Cotton’s big head, and very often you don’t understand what hit you when you first play it. The game might feel kind of random to some of you. But while Rainbow Cotton is criticized for its flaws, Panorama Cotton gets highly praised for its impressive visuals and remains one of the most sought after Mega Drive cartridge. The game indeed looks wonderful. If you set Cotton’s speed to the maximum, the fasted paced scrolling becomes incredible. It’s hard to believe that the Genesis is able to render this kind of effects, especially the stunning background scaling. 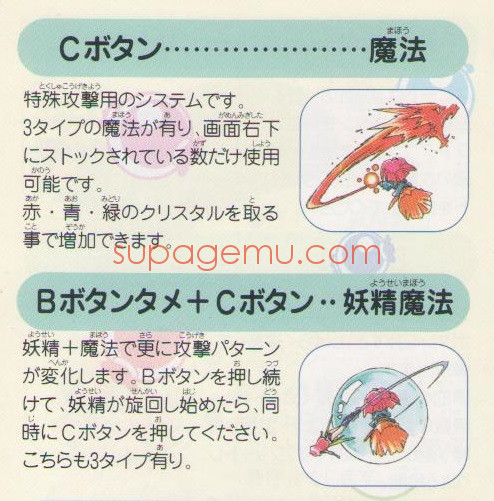 But Panorama Cotton is not supposed to be a demo scene. What gamers want first and foremost is a fun game, and fortunately Panorama Cotton also provides high satisfaction in that domain. What might seem like a messy game is actually a very fast paced but accurate shooter. When you get used to it, you know exactly what mistake you made when you get hit. It’s very important to learn how to play properly otherwise you won’t get far and thus won’t really enjoy the game. If you hold the fire button without releasing it, Silk (the fairy who travels with Cotton) will start circling around you, and your shooting frequency will decrease. So do NOT always hold the fire button, unless you DO want Silk to circle around you. When Silk revolves around you, the spell that is cast by pressing the magic button gets different from the one that is normally launched. There are two different spells for each crystal color, exactly like in the original Cotton game. My favorite spell is the Silk blue support spell. I enjoy being invincible very much! The experience system is still there too: a bar gets filled as you shoot down enemies. But beware: getting hit will level you down!

The fact that the game does not start strong also played a large part in deceiving me. The first stage looks good but is the least impressive of the five in my opinion. Furthermore, the first boss is nothing special. The second stage looks only a little better, but the third one is unbelievable! The fourth and the fifth ones are simply gorgeous. I especially love the beginning of stage 4.

While the visuals are outstanding, the soundtrack is more standard. I think it could have been more exciting. I personally prefer the level themes of Cotton: Fantastic Night Dreams, Märchen Adventure Cotton 100%, and Rainbow Cotton. Other than that, some classic Cotton themes are back (the title screen and the game over themes for instance).

A lot more personality than boring spaceships and aliens

Panorama Cotton has got A LOT of personality. The story is told through a very nice introduction filled with colorful characters and humorous dialogues. It contributes a lot to the game’s great atmosphere. It takes place after the events of the first Cotton game. Silk was writing about what happened when Knit (another fairy) interrupted her and told her Queen Velvet was acting weird. Then, as Silk and Knit were carrying a burnt “Willow” to throw it away, they met Cotton who jumped on it and ate it… It might sound weird and incoherent, but it is actually very funny and entertaining.

You will need some practice to master the game. Indeed, you will have to get used to the view, understand the magic system, and learn the design of levels. Nothing too complicated, but even the easiest mode might require a few tries before beating it. Being shorter (5 stages instead of 7), the game proves to be easier than the original Cotton game though.

A game worth its price

Being both awesome and scarce, Panorama Cotton is not cheap to say the least. I am sorry to contribute to inflation in retro video games prices, but it might actually be worth the 300+ bucks you will have to spend to get it, especially if it comes with its beautiful invaluable mug. Sometimes I just sit home, stare at my beloved Cotton tea cups, and then smile for hours. Isn’t that true happiness?

Panorama Cotton is incredibly good looking for a Genesis game. You HAVE to check the third stage in motion at least once in your life.

Panorama Cotton’s soundtrack is the one I like the least in the entire series. Having said that, it is still decent and fits well with the graphics and story.

The game might feel random at first, but it is actually pretty accurate. You can even control the speed of the broom.

I actually have a slight preference for the classic gameplay of the first two episodes, which are perfectly clear and fun to play (not to mention a lot cheaper), but Panorama Cotton provides a nice change. Plus, Panorama Cotton offers a lot of variety: there are a lot of different enemies and obstacles each with their own behavior, and the screen does not only move forward, but also horizontally (stage 3), vertically (stage 4), and even diagonally (stage 3)! Variety is essential for this kind of third-person rail shooter.

Humorous dialogues and well-designed characters introduce the story in a funny and pleasant way. Like the other Cotton games, Panorama Cotton has got a lot of personality and stands out from other shooters.

Panorama Cotton really benefits from a lot of technical innovation and tricks which made the stunning background scaling and other various visual effects possible on the MegaDrive.

There are five long stages, each coming with a mid-boss and a final boss. There are even multiple paths! Plus, the game proves to be not too easy. You might need a few tries to beat it. You will also get a BIG surprise if you beat the game with a really high score.

Panorama Cotton would be a must have if it were not so expensive. It’s too bad this great cartridge was only released in Japan in limited quantities. Its outstanding visuals and varied gameplay make it one of the best third person shooter of all time.

I prefer Panorama Cotton to classics such as Space Harrier or Star Fox because of its colorful stylish graphics and its anime style funny characters.