Nazca Corporation, a now extinct studio composed of former Irem staff members, is famous for having developed the legendary Metal Slug, but the company’s first independent release was Neo Turf Masters (Big Tournament Golf in Japan) in early 1996. For Nazca to start with a golfing game might seem surprising at first, but if you take a closer look at Irem’s works, you will notice that at least four Nazca members (Kinte, Zen, Hirokun, and Ken-Kui) worked on Major Title 2, a golf simulation released in the arcade in 1992 by Irem. Kinte also worked on the first Major Title game. So Nazca already had experience with golf games before tackling the Neo Turf Masters project. 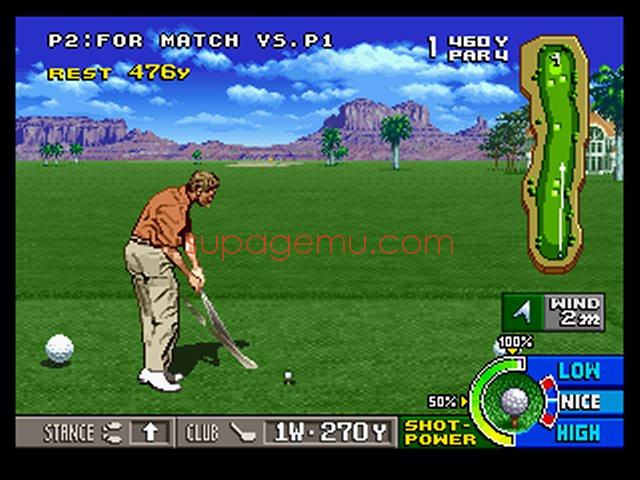 That experience partly explained how Nazca was able to build up one of the best golfing game ever, if not the best. If you compare it with Minna no Golf (Hot Shots Golf in the US), which was one of the best golfing game from that era (1997), some of the differences that will first strike you are the pace and the simplicity of Neo Turf Masters. The latter is much faster and smoother than most other golfing games. Furthermore, there are a lot less options in Big Tournament Golf than in Minna no Golf and other domestic golf simulations. This pace and directness make it more exciting and perfectly suit an arcade game, whose goal is to quickly suck up your quarters. The controls are also easier to handle than Minna no Golf’s ones, making Neo Turf Masters a game that provides immediate gaming pleasure and that you can enjoy playing with your friends even if they have never tried it before. By contrast, Minna no Golf puts players who never experienced it at massive disadvantage versus seasoned players, because its timing and controls are harder to get.

Another characteristic of Big Tournament Golf is its liveliness. The colorful graphics and characters make it a lot less stern than most other golfing games, one notable exception being the Mario Golf series. But while the Mario Golf series probably goes too far in the silliness (some characters simply look ridiculous, and all of them can scream to distract their opponents as in Minna no Golf), Nazca’s baby remains classy. The first impression left by Neo Turf Masters is one of a distinctive delectable taste. Tasteful people will enjoy its very unique, relaxed, yet elegant atmosphere. Simply listening the exquisite jazzy-fusion soundtrack and watching the game run induce esthetic pleasure. Indeed, all the themes sound fabulous (music is played during the play of a hole), and the stylish visuals aged extremely well (as always, 2D graphics age much more gracefully than 3D ones). They are very clear and include some breathtaking scenes such as the Grand Canyon or waterfalls. 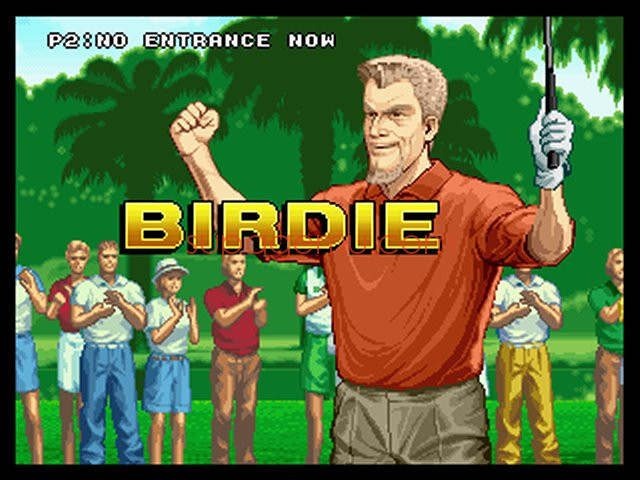 Straightforward, but deep enough and challenging

Fortunately, the gameplay is on par with the audio-visual aspects. It actually might even surpass them. What proves it is that the excellent Neo Geo Pocket version, which is stripped of the audio-visual greatness, is as addictive as the arcade one! The secret lies in the simplicity of the controls, which yet succeed in providing enough depth. You simply have to aim, press A to adjust the power, and then tap A again to set the height of your shot. That’s it! The shot execution is fast and painless (there is no latency to deal with), giving you the incentive to see how the next shot goes.

However, don’t draw the hasty conclusion that Neo Turf Masters is an over simplified golfing game. First, you can add a slice or a hook effect to curve the ball. Those effects can prove useful to avoid trees for example. Secondly, there is also the less known option of adding a retro or a top spin effect. There is nothing more satisfying than seeing the ball rolling back into the hole! Finally, some pretty challenging holes require extreme accuracy, making the game hard to beat in normal mode. As a side note, the difficulty settings does not seem to have a significant impact on the courses but rather on the level of your opponents. A -2 score will probably be enough to rank first on easy mode, but you will need to perform even better to win on harder difficulties. 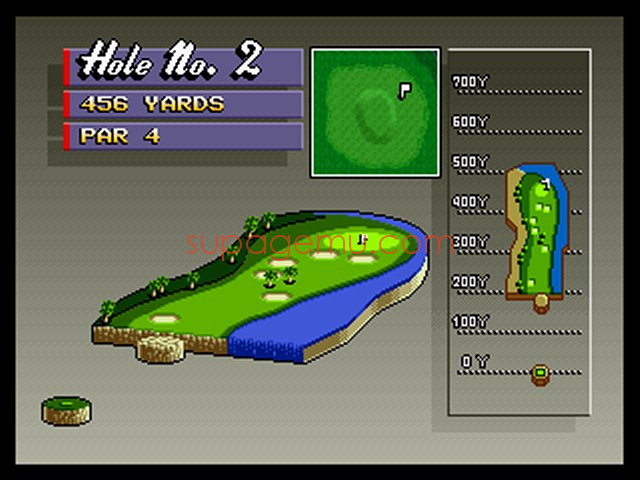 Great for both the arcade and domestic use

Neo Turf Master’s depth will probably satisfy most arcade players, but might leave some golf experts wanting for more. Obviously, it does not have the depth and options of the most elaborate simulations, but it is not THAT left behind in terms of length, characters, and parameters compared to console golfing games of its time. There are four courses to choose from: U.S.A, Germany, Japan, and Australia (note: the first course to be displayed on the select screen depends on the hardware version: for example, the Japan course will appear first on a Japanese Neo Geo console), while Minna Golf and Mario Golf 64 include 6 courses for example. It is interesting to note that even a “serious” golfing simulation like PGA tour Pro (PC, 1997) only provides two courses (plus one as a bonus)! Besides, doing the same courses over and over never gets too repetitive: Neo Turf Masters generates a different green (distance, hole’s position and relief) every time. Distance varies from 2 to 5 per cent. Consequently, learning the holes by heart is not possible. Parameters such as wind and grain (on the green) must of course carefully be taken into account before shooting. As a side note, weather effects are limited to the wind ones (there is no rain in this game).

There are six golfers to choose from:

By contrast, Minna no Golf features 10 characters, while PGA Tour Pro and Mario Golf 64 both offer 14 characters (+ 4 who can be imported from the Game Boy Color of Mario Golf version using the transfer pack). So Neo Turf Masters falls short on characters, but does that really prove important? Seriously, who is going to master all 14 characters of Mario Golf 64? Six is already plenty, especially if you plan to win courses with each one of them.

The kind of option that is actually missing from Neo Turf Masters is for example the possibility to freely browse around the courses to precisely locate pitfalls and to measure distances. You will have to memorize the map and the distances that are briefly displayed before each hole. Some may argue that it makes the game even more interesting since it forces you to judge distances by yourself, but I think it only adds some randomness. This shortcoming was fixed in the Neo Geo Pocket version, in which a graduated map is always displayed, enabling you to exactly know where your shot will end up. Furthermore, bonuses, experience points, camera change, mini-golf, trophy room, and unlockable clubs, characters, and courses are obviously missing from Neo Turf Masters, but that was to be expected from an arcade game, and frankly, that is not so bad!

Neo Turf Masters mixes partially digitized sprites and wonderfully drawn backgrounds. The classy visuals convey a powerful feeling of elegance. Every screen is a delight to look at. The game aged very well and remains one of the most beautiful golf simulation ever.

The controls respond perfectly and are very simple to master: aim, press A to adjust the power, and then tap A again to set the height of your shot. That’s it! Angry losers will have to blame something else than the controls to explain their defeat (Lady luck for instance)!

Nazca brilliantly succeeded in making a simple, yet deep enough (4 courses, 6 golfers, effects to curve the ball, longest drive and closest to the pin contests…) and very addictive golfing game for the arcade (you lose one life for each “Par” and gain one for each “Birdie”), that works well at home too.

Neo Turf Masters innovates in the very stylish and simple way it simulates a golf game. Plus, this is the only golf game for the Neo Geo, along with Top Player’s Golf.

The captivating 2 player mode guarantees endless hours of fun. Completing one of the four courses leads to the staff roll, but Neo Turf Masters is so good that you will want to finish all the courses. Tip: you can use the memory card to cheat and start over the last hole in case of a missed shot.

Nazca’s first release is a timeless masterpiece. It brilliantly combines simplicity and beauty.

Neo Turf Masters is my favorite golfing game ever. Frankly, it is hard to go back to Top Player’s Golf and to most other golfing games after trying it. In my opinion, its simplicity and its fast pace make it the funniest golf simulation ever.