The original Kiki Kaikai arcade game came out in 1986 and was developed by Taito. Natsume then moved the series to the next level by developing Kiki Kaikai Nazo no Kuro Manto (titled “Pocky & Rocky” in the West) for the Super Famicom.

A recipe to success: complying with the spirit of a series while vastly improving other aspects

The original Kiki Kaikai arcade game came out in 1986 and was developed by Taito. Natsume then moved the series to the next level by developing Kiki Kaikai Nazo no Kuro Manto (titled “Pocky & Rocky” in the West) for the Super Famicom. It brought huge improvement over the original game while remaining consistent with Kiki Kaikai’s world. For instance, the first stage is some kind of remake of the first level from the original arcade game with the same boss at the end, and the snakes that pop out from pagodas are back. Nazo no Kuro Manto is a perfect example of how games should evolve in my opinion: the characters and the setting of the original game are still the same while everything else was vastly improved. 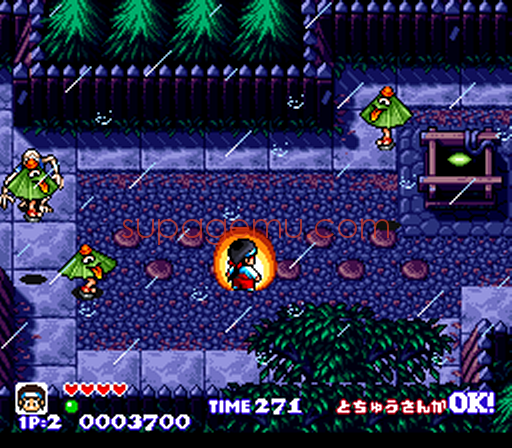 The first obvious improvement is at graphical level. Kiki Kaikai’s mysterious world now looks gorgeous thanks to the Super Famicom’s visual capabilities. The visuals depict a magnificent far eastern, mystical, yet cute universe. They naturally remind me of Ganbare Goemon Yukihime Kyûshutsu Emaki (The Legend of the Mystical Ninja), which is one of my most cherished game. My favorite segments are the stunning rain sequence within the first stage and the lush bamboo forest from the second level.

The second biggest improvement is the 2 players’ mode. The young priestess Sayo (Pocky in the US/PAL version) is not alone anymore. Manuke the Tanuki, who should be well known by players who are familiar with the first Kiki Kaikai game, now comes along. The 2 players coop mode really adds another dimension to the game, making it even more enjoyable. You can decide to take care of one part of the screen while leaving the other one to your partner, and share the bonuses in a smart way. It is indeed more efficient to collect only one type of weapon upgrade (the blue one or the orange one) and to let the player who needs it the most pick up the food that replenishes life points. Dividing the tasks also proves to be a productive strategy: for instance, you can easily beat the boss of the fourth stage by having one player protect the other with the magic stick while the other player focuses on shooting. The 2 players’ mode is so fun that Electronic Gaming Monthly elected Pocky & Rocky the best 2 players game of the year in 1993. 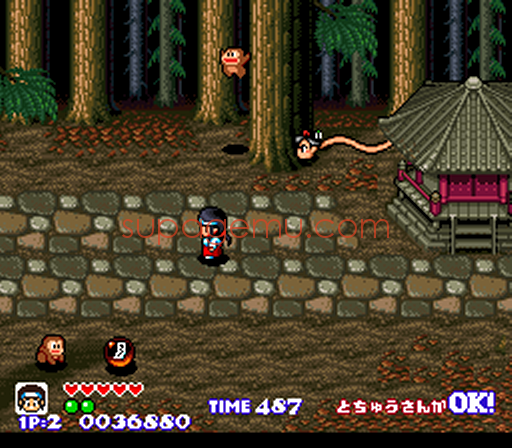 The last noticeable improvement lies in the gameplay enhancements. The basic moves are still there and some new ones were added: besides throwing cards and waiving the magic stick, it is possible to slide and throw bombs. Sliding is a very effective way of dodging the attacks of your opponents. Mastering it is important but you will have to be careful not to touch your partner while sliding: if you do, control will be lost and your partner will randomly spin across the screen. This spin move can be very annoying even though it damages the enemies. Waving the magic stick (or your tail if you select Manuke the raccoon) proves to be a lot more important than in the first game: some attacks can only be deflected that way. This fact makes the gameplay interesting because it forces you to switch between shooting and waiving, preventing you from just shooting all the time. Sayo and Manuke also each have a special attack that can be launched by keeping the B button pressed and releasing it after a few seconds. I am not a big fan of Sayo’s special attack: she spins and hurts every enemy surrounding her, but this move does not seem very useful to me. On the other side, Manuke special move consists of becoming invulnerable upon turning into stone. This move can be especially useful against some bosses… There are also some other subtler differences between the two characters: Sayo is a little faster while Manuke slides further, and their bomb coverage area is not the same.

While the levels of the original Kiki Kaikai game were kind of flat, those from Nazo no Kuro Manto provide a stimulating variety of situations: Sayo and Manuke have to cross bridges, a river using a raft, and mountains. They also board a ship in which the scrolling is automatic during the fourth level.

Nazo no Kuro Manto means “The mysterious black mantle”. Indeed, a sorcerer wearing a black cloak (which is actually more dark purple than black) cast a spell on the Nopino Goblins, a group of strange creatures and animals to which Manuke belongs, making them go insane and hostile. This plot can seem overly simplistic, but it sets the game in a lovable far eastern and enigmatic environment, inhabited by ghosts and creatures from Japanese mythology. The soundtrack perfectly fits this environment and deserved to be almost as praised as the visuals. Indeed, the music conveys a delicious, mystical, Japanese, and epic feeling. I found the theme from the second stage especially memorable.

Pocky & Rocky is known for being more challenging than it looks. Do not be fooled by the cuteness of the protagonists and some of the antagonists! The game gets hard starting from the third stage, without ever being frustrating or unfair. You will have to patiently learn the enemies’ patterns, and the levels’ traps and structure. Mastering the magic stick and the slide movements is also important. I think Nazo no Manto delivers the right amount of difficulty: it is very far from being impossible to complete, while still being challenging. Do not be ashamed to start with the easy mode! Going with the 2 player’s mode also make things a lot easier. The intense action and the relentless opponents contribute to make Pocky & Rocky a tough game. As always with the Super Famicom, slowdown could have been feared, but there is almost none. The fact that slowdowns are virtually non-existent is pretty remarkable for such an intense game. 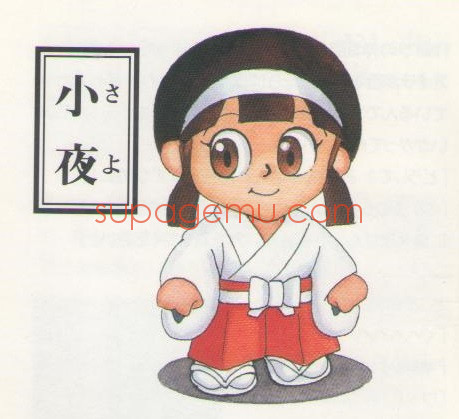 A must-have for Super Famicom owners and action fans

Kiki Kaikai Nazo no Kuro Manto is by far the best game of the series. It is obviously better than the first game, which feels outdated, and a lot better than its sequel (Tsukiyo Zôshi) too. Indeed, Natsume kind of screwed up the 2 player’s mode of the latter. The second player does not even have his own life meter and sometimes has to wait before being able to play in Tsukiyo Zôshi! Plus, the adventure/RPG elements make the action less intense. So if you had to buy only one episode from the series, Kiki Kaikai Nazo no Kuro Manto would be the obvious choice. I recommend getting the Japanese version because the cover is a lot nicer (not a big fan of Pocky’s face in the US/European version) and some enemies have been redrawn to actually look worse (sigh) in the US version. For instance, the boss of the fourth stage, which is a harpy in the Japanese version, has been replaced with an armored bird. Besides, Natsume’s japan slogan is a lot funnier in the Japanese version (“It’s TECHNOSTASY. SINCE 1987”) than in the western one (“Serious fun”)!

The gorgeous graphics are one of the game’s forte: they had a very unique far eastern, mysterious, yet cute style to which only The Legend of the Mystical Ninja could compare at the time.

The soundtrack conveys a wonderful mystical feeling. The second stage and the ending themes are especially beautiful.

The basic moves still consist of throwing cards and waiving the magic stick as in the first Kiki Kaikai, but Nazo no Kuro Manto cleverly uses the SNES controller to add new possibilities such as sliding and throwing bombs. Every move is executed smoothly, although switching from throwing cards to waiving the stick takes one second, which can be annoying.

The action is very intense and never gets too repetitive thanks to varied environments (a bamboo forest, a mountain, a ship, etc.) and interesting situations such as crossing a river using a raft. The two players’ mode really shines.

A nice mysterious setting and lovable characters make the story interesting. I really enjoyed the poetic and beautiful ending scenes.

Nazo no Kuro Manto is a classical overhead run’n gun like Twinkle Tale, but its unique and mesmerizing atmosphere makes it stand out.

The game proves to be challenging. The first two stages are rather easy, but the difficulty dramatically increases starting from the third level. Completing the three difficulty levels (easy, normal, and hard) might take you a few days. The compiled length of the six stages is above average (50 minutes if you never fail, but believe me, you will).

Kiki Kaikai Nazo no Kuro Manto is easily the best game of the series thanks to its intense action, its wonderful far eastern atmosphere, and its great two players’ mode (which is a lot more satisfying than the one from its sequel). It’s a can’t miss for action fans who own a Super Famicom.

I instantly fell in love with Pocky & Rocky’s graphical style when I first saw some screenshots of it in magazines in 1993. It reminded me of Ganbare Goemon Yukihime Kyûshutsu Emaki (The Legend of the Mystical Ninja), which is one of my all-time favorite games. Pocky & Rocky did not disappoint me at all when I first bought it in 1993. It turned out to be a technically perfect game, immersed in a very tasteful far eastern universe.