Hyper Duel was not really what the market wanted in 1996-1997. Most mainstream gamers and journalists looked down upon that 2D shooter that was originally released in arcade in 1993, and press coverage was minimal in the West. The fact that it was only released in Japan was only logical. But Hyper Duel was exactly what hardcore shooters fans craved for: an old school 2D shooter with intensive action and improved visuals over 16-bit shooters. Indeed, in terms of design and atmosphere, Hyper Duel looks like an enhanced version of Thunder Force IV without the weapons selection, but with a robot form. 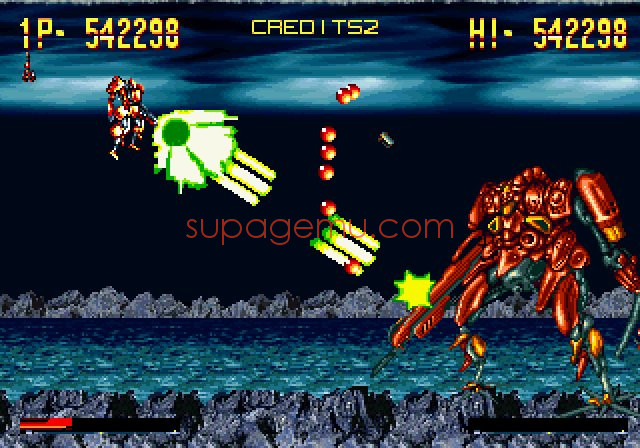 Like Macross Scramble Valkyrie (on Super Famicom), Hyper Duel provides the possibility to switch from a ship to a flying mecha suit. But whereas the Macross ship had three forms, there are only two in Hyper Duel. You will have to switch between the ship form and the robot form depending on the situation. The ship is smaller, and thus easier to maneuver for dodging, while the robot has got a more powerful shot. Other differences are that the robot can shoot from an angle and that the ship’s special attack goes in all direction. Having to find out which form is more efficient for every segment makes the gameplay a lot more interesting than very straightforward shooters such as Blast Wind’s (in spite of Blast Wind’s multiple paths). The basic strategy consists of always using the ship form, except for bosses. Don’t always stick to that strategy though: for instance, the mecha form proves to be very efficient for the whole stages 7 and 8. 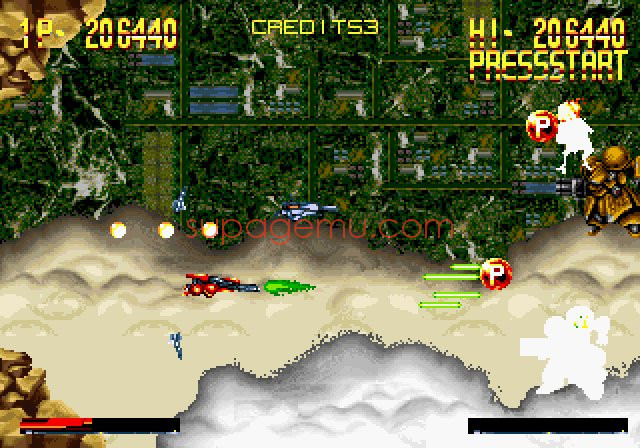 This shape shifting system is fun and very simple to master. As a result, Hyper Duel provides immediate gaming pleasure. It’s a lot easier than Thunder Force V, the latter being a game you have to start over several times to learn the levels and to improve little by little. By contrast, Hyper Duel provides effortless enjoyment. When you use a credit, you respawn right where you died, and you can increase your lives and credits number to five (you can even select the freeplay option). So unless you run out of lives, you won’t have to redo the same parts over and over. Furthermore, the levels are really short and never annoying: there is absolutely no tedious segment! The game can be completed within 20 minutes. What could be considered a weak point actually turns out to be a strength: Hyper Duel is a condensed action packed shooter that you can play three times in a row without getting tired of it. Very few games possess that strength. Yet, the game provides enough challenge. Beating it in normal mode may require a few tries, and if you find it too easy, you can decrease your number of lives and credits, and increase the difficulty level. If you are a seasoned shooter player, you should probably set the difficulty settings to the hard mode, even on your first try. I didn’t see much of a difference between the normal and the hard mode.

Of course, the shape shifting is not all what Hyper Duel has to offer. It also includes Weapon upgrades:

It is interesting to note that there are no screen clearing bombs in this game, only a special attack that you will have to manage by checking your gauge. The fact that the game is devoid of bombs makes it more balanced and interesting in my opinion: instead of piling up bombs to crush bosses, you have to really confront them.

To add a little more depth, Hyper Duel lets the player select a character among three:

I usually choose Lisa or Keith. Lisa’s speed is really helpful when you don’t know the levels by heart.

Hyper Duel was already a great 1993 arcade game. The Saturn version makes it even better by improving everything:

The original arcade game is included in the CD, but the Saturn mode surpasses it by far.

Being short and painless, Hyper Duel is ideal for hardcore gamers who enjoy one credit or one life challenges. It will suit both casual gamers and records fans. You can even try to perform a perfect game on every stage (destroy all enemies) to get extra points. As a side note, it’s very easy to make a perfect play on the very short, strange, and relaxing fifth stage. I also find it easy to perform a perfect game in levels 2 and 8.

For $50 to $80, Hyper Duel was a very nice addition to a games library in the late 90s and early 2000s. Now it seems a little silly to spend $400 on a game that can be completed within 20 minutes to be perfectly honest.

Hyper Duel offered tasteful old school 2D graphics in all its glory during the 3D craze. On a more personal note, I have a soft spot for the seventh stage: that bleak futuristic city at war creates a great atmosphere.

Hyper Duel does not suffer from the same issue as Blast Wind, in which the music can hardly be heard because of the very loud sound effects. This is fortunate, because it means we can enjoy the amazing soundtrack composed and rearranged by Hyakutaro Tsukumo. It has a very energetic Techno Soft style.

The shape shifting system is very easy to use, and the possibility to lock the shooting direction of the robot is a clever addition.

Hyper Duel provides intensive action, with a lot of sprites and bullets to dodge on the screen, and without any slowdown. Everything is perfectly balanced (weapons, bonuses, enemies) making Hyper Duel an addictive shooter that succeeds in never being frustrating or boring.

There is almost no story. The Earth sends out three ships called “Buster Gears” to defend itself against aliens. There are no dialogues and no character development. That may actually be a good thing, because the action never gets interrupted as a result.

Switching form by simply pressing the A button (ship) or the B button (robot) was a great idea, especially for a game that was originally released in 1993.

Each one of the eight levels only last for about two minutes and a half, for a total of 20 minutes. Furthermore, the game is a lot easier than the Thunder Force series. However, Hyper Duel is so good that you will want to replay it many times.

Techno Soft fans will savor every last minute of Hyper Duel. The action never gets tedious and the fantastic soundtrack contributes a lot to the energetic feeling of this great old school shooter.

Hyper Duel is my favorite Techno Soft shooter on the Sega Saturn. I find it slightly harder, more appealing, and more interesting than Blast Wind, and funnier than Thunder Force V.