When Nintendo brought the Fire Emblem series to the Super Famicom, they really did a great job: not only did they remake the first Famicom game (that is Book I: War of Darkness), but they also added a brand new campaign: Book II: War of Heroes.

When Nintendo brought the Fire Emblem series to the Super Famicom, they really did a great job: not only did they remake the first Famicom game (that is Book I: War of Darkness), but they also added a brand new campaign: Book II: War of Heroes. As a result, Fire Emblem Monshô no Nazo (which means “Mystery of the Emblem”) provides more than 50 hours of engrossing gameplay! 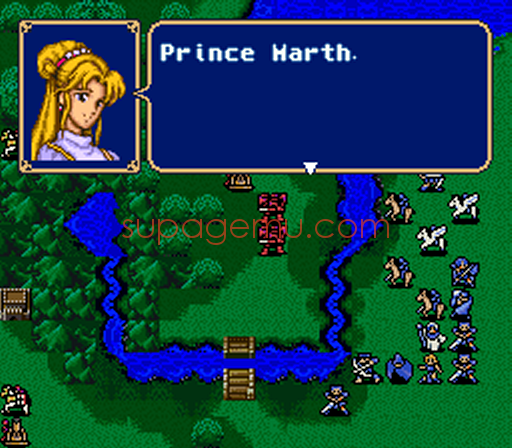 Five chapters from the original Famicom game (Ankoku Ryu to Hikari no Tsurugi) and some characters were removed though, due to the limitations of Super Famicom cartridges, so that Book II could fit in. The updated graphics might seem outdated now but they looked more than satisfying at the time. The two other Fire Emblem games on Super Famicom (Seisen no Keifu and Thracia 776) offer much more refined graphics, but that is not what is really important here. The game system is so brilliant and motivating that you won’t care much about the graphics. The battles and the characters’ development are indeed very absorbing. The remade soundtrack (which still sounds fantastic!), the visuals, and the story get sidelined due to the awesome gameplay.

The gameplay is both merciless and rewarding. You will most likely be punished for your mistakes. In most cases, it will mean a character’s permanent death. Fire Emblem is indeed infamous for making your characters die permanently when they lose in battle. You are then free to go on playing anyway (except if Marth, the main character, dies) or to restart the chapter. But if you play well, you will be rewarded by powerful units and items that will make the game easier. The Fire Emblem system works like a double-edged sword: the smarter your moves and management, the easier the game will become. But if you let powerful or important units dies, then it will get harder and harder. Hence the recommendation to restart the whole chapter after one deadly mistake.

Fire Emblem Monshô no Nazo aims at careful patient strategist. If you get easily angry when you have to restart a chapter and feel like you wasted your time, this game might not be for you. One of the pleasures provided by Fire Emblem is refining your strategy after losing. If you have got the right attitude, then you will learn from your mistakes, and walk on the path to perfect victories (no deaths, all treasures collected, and all characters recruited).

Monshô no Nazo is a lot more punitive than its successor (Seisen no Keifu). Indeed, Seisen no Keifu allows you to save your game at the start of every turn. So, a deadly mistake will not mean restarting from the beginning of the chapter but from your last save (and that is fortunate, considering the length of each chapter). By contrast, Monshô no Nazo only provides a suspend option (a save that will get automatically deleted when you load it), and thus forces you to be more careful and more focused. This punitive side makes Monshô no Nazo harder and arguably more interesting to play than Seisen no Keifu. In the end, both games prove to be remarkably well balanced (shorter and more punitive chapters in Monshô no Nazo, as opposed to longer and less frustrating battles in Seisen no Keifu).

Being basically a remake of the first Fire Emblem game compiled with its sequel, Monshô no Nazo uses simpler mechanisms than the ones used in the subsequent episodes. The battle system does not use the rock-paper-scissors relationship introduced in Seisen no Keifu in which swords are more efficient against axes, axes are stronger against spears, and spears are more powerful against swords. The issue of the fights depends on the characters’ stats and on the terrain bonus. You will have to calculate the results mentally (damage = attack – defense) since there is no preview of the outcome. This lack of preview could surprise players who got acquainted with the series through the Game Boy Advance or DS episodes.

The class system is also very straightforward. You can promote a unit once it reaches level 10 (but in most cases, it is better to wait for level 20) if you have got the item required for promotion in your inventory. For example, you will need the “Hero proof” to promote mercenaries to heroes. However, Marth (and thieves) cannot be promoted, making him kind of a sucky hero who maxes out at level 20. 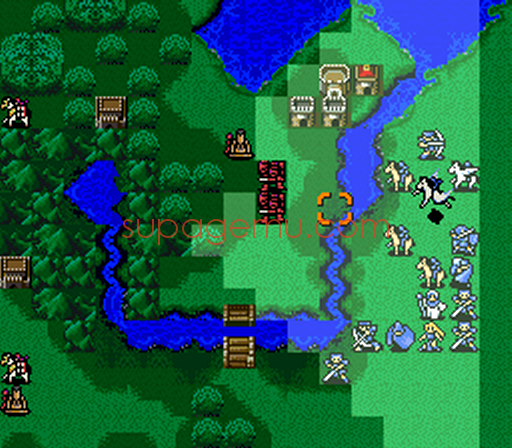 While the first book is still very enjoyable to play, the second one is the real meat of Monshô no Nazo. It is longer, harder, and more interesting than Book I. The story is lot more compelling. It actually benefits from the first book, which set the background story. The management of units is also more stimulating thanks to the orbs: each of the 12 orb improves your chance of increasing some stats when you level up. So it is very important to distribute them in a smart way.

In spite of his age, Fire Emblem Monshô no Nazo is still a wonderful Tactical-RPG. This highly addictive game really excels in immersing the player in the battles. Be wary though, the game is very challenging and will not suit everyone. But this is precisely what makes it so fascinating, a lot more captivating than the Shining Force or the Ogre Battle series in my opinion. Fire Emblem fans who started the series with the Game Boy Advance, Game Cube, DS, or 3DS episodes and who never played it should absolutely give it a try. Since it includes a remake of the first episode, it is also a fantastic way to start out the series.

The graphics on the battlefields are outmoded, but the battle scenes look nice, and the characters’ design is elegant.

More battle themes would have been pleasant, but as a whole the soundtrack is great. It always conveys the appropriate feeling.

The menus are easy to use. There is only one flaw: you cannot decide on the starting position of each unit. Players who get acquainted with the series through the latest episodes may also be surprised by the fact that there is no preview of the outcome and no easy way to view the attack reach of the army of enemies.

Managing and moving your units, distributing the experience, and refining your strategy to beat this challenging game prove to be very exciting.

The story of the first book feels kind of bland, but its setting (a medieval period filled with swords and dragons) is very pleasant. The scenario from the second book proves to be a lot more compelling.

Of course, Monshô no Nazo is not as innovating as Fire Emblem Ankoku Ryu to Hikari no Tsurugi, which was the first console Tactical-RPG (Famicom Wars being more of a turn-based strategy game than a Tactical-RPG). Still, Monshô no Nazo felt very unique and very different from Langrisser, Shining Force, and Ogre Battle when it came out in 1994. It is indeed a lot more challenging. The fact that you cannot afford any mistake makes it a REAL tactical game.

The first book can be completed within 20~25 hours. The second one is longer (about 30 hours). As a result, Monshô no Nazo provides more than 50 hours of captivating gameplay. Since you will have to restart some battles, you can anticipate about 60 hours of bliss.

Fire Emblem Monshô no Nazo is a real classic and a great way to get into the series.

I have got a preference for Seisen no Keifu because of the second generation and the children system, but Monshô no Nazo still has my preference over the Game Boy Advance and 3DS episodes.