Dragon Force blew away the world of console Tactical RPGs when it came out in 1996. More than 20 years later, this wonderful and highly addictive real time strategy game still has a cult following.

The battles were really impressive in 1996, but the game’s forte actually resides in its gameplay

Dragon Force is one of the most well-known Saturn games. It got good scores in every video games magazine and the screenshots showing dozens of soldiers fighting on battlefields were really impressive at the time it came out. Dragon Force simply looked outstanding. 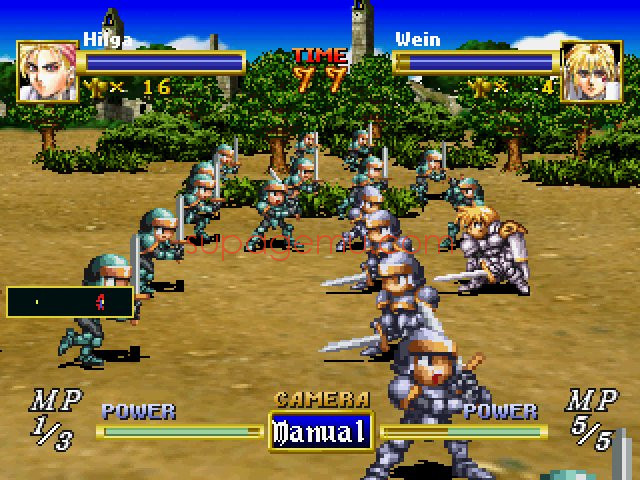 Some time is required to figure it out

However, the first hour of gameplay can prove to be confusing and even kind of disappointing. There are a lot of obscure menu options, no in-game tutorials, and even no clear objectives. You will probably spend the first hour trying every option, learning how to play, and reading the instruction (the US manual was beautifully done by the way. Good work, Working Designs!). Dragon Forces plays a little like Ogre Battle and especially Ogre Battle 64 in that they are real time strategy game: you have to choose a destination on the map and then simply watch your troops walk toward it in real time. Still, I never felt so lost when I played the Ogre Battle series. “What the hell I am supposed to do?!”, “When do I fight?!”, and “Maybe I should play Thunder Force V instead” were my first thoughts. Actually, the game system is not that complicated, but it requires at least an hour to figure it out. Investing that first hour is really worth it though. If you don’t, you will miss out a fantastic and very addictive strategy RPG.

Since I really care about my beloved readers, I prepared a quick start guide for you. Unlike the instruction manual, I will go straight to the point (The instruction explains useless thing such as “How to start a new game: Select NEW GAME on the title screen”)

I hope the map will be to your liking, because there is only one. That’s right: the entire game consists of real time battles fought on a single world map. It may sound a bit boring, but benefiting from your previous victories to widen your area within a single map is actually very motivating. Observing the moves of other kingdoms is also very interesting: they attack each other, creating some opportunities for you to invade castles or finish off weakened units. There is total of eight kingdoms including the one you chose. You can select one among six in the beginning:

You will have to unlock the remaining two kingdoms by completing the first six scenarios. The action takes place in the land of Legendra, in which the evil god Madruk wreaks havoc again after having been sealed 300 years ago by the Dragon Force members. Of course, the eight monarchs are actually the eight new members of the Dragon Force! As you can see, the story is nothing special, but it still works pretty well.

The battles were the most impressive aspect of Dragon Force: there can be as many as two hundred soldiers on the battlefield, without any slowdown (the only slowdown I noticed occurred during the final battle). They really looked awesome in 1996!

But the game’s forte actually resides in its gameplay. Once you get how it works, Dragon Force will become a highly addictive game that can be played for 4 or 5 hours straight without getting bored. You will always want to see what happens when you try to invade the next castle. The more you play it, the more deeply you understand the game mechanics and enjoy it. Sending a group of strong generals to try to invade a castle with a formation and tactic combination that worked well in the past proves to be an irrepressible desire! 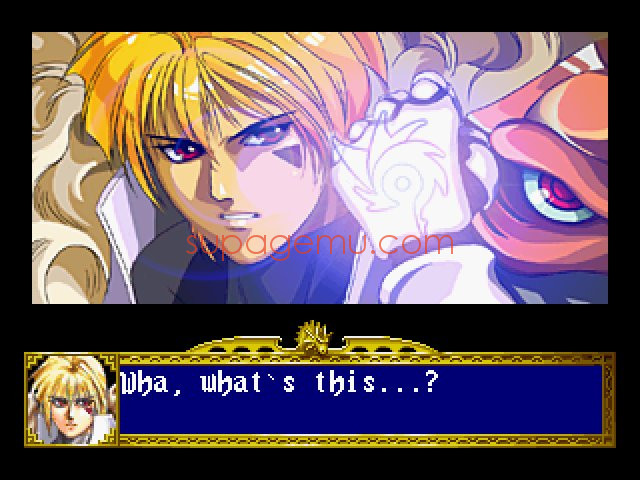 But once you have figured out the game’s mechanics, the game turned out to be pretty simple, maybe even too easy. It is not hard to beat at all. Even the final confrontation is quite easy.

Another flaw resides in the tediousness of some tasks. Managing your generals within the administration mode is fast and easy in the beginning, when you only have got a dozen of them, but it becomes a real chore once you get about forty generals. If you want to check whether a general is about to commit treason, you will have to set up an audience with every general, one by one! Same thing if you want your generals to look for items. An option to search all the castles at once and a screen showing all the unhappy troops would have been really nice.

Another part I didn’t like very much was the one that occurs after the Dragon Force members get united. This part is not as interesting as the first part, and can even be annoying because of an invincible enemy unit that invades your castles, starting some useless battles in the process. Fortunately that part is a lot shorter.

Even though the game is more than 20 years old, I think it’s still very enjoyable and worth getting it. The US version is kind of pricey but its cost remains reasonable compared to other Saturn US RPGs such as Albert Odyssey or Magic Knight Rayearth that I consider less worthwhile. A lot of pricey games might turn out to be disappointing, but Dragon Force does not fall into that category. This game is worth every penny.

The large scale battles were truly impressive back in 1996. They may look a little too pixelated now. The pictures depicting the story are nice too.

The music is good, but not great. Some themes are pretty catchy: the title screen, the menus, and the battle themes. Most of the tracks are kind of peaceful. They never get on the nerves. The characters’ introduction sequence right after the title screen has got a nice 90s style.

I think some menus could have been improved. Going through all the castles to search for items and to fortify them is cumbersome. The way you move the troops on the map is not very user friendly either.

The plot is not unusual in any way, but the characters and the dialogs are well done.

Dragon Force’s take on the strategy RPG style proves to be completely different from the one chosen by classics such as Fire Emblem, Shining Force, or Tactics Ogre. Most of Japanese Tactical-RPGs are turned based games with one map to complete in each chapter (Ogre Battle and Ogre Battle 64 are real-time games but with several maps). The real time one map system of Dragon Force stands out.

Completing the game takes about 30 hours for one character, and there are eight of them. The question is: will you really feel like completing every scenario, considering the tediousness of some tasks?

Although less interesting than Fire Emblem in the long run, Dragon Force turns out to be a highly addictive strategy game with great atmosphere and artworks. It is highly recommended to console strategy fans.

On a more personal note, Dragon Force succeeds in making me feel nostalgic about an era that I did not really like: the end of the 16 bit era and the 3D craze. Indeed, Dragon Force has a very 90s anime style that reminds me of a period when manga and anime became really popular in the West. It is also one of the best RPGs of 1996-1997 along with Shining Force III, Bahamut Lagoon, Tengai Makyô The Apocalypse IV, Grandia, Final Fantasy Tactics, Wild ARMs, Treasure Hunter G, Star Ocean, etc.